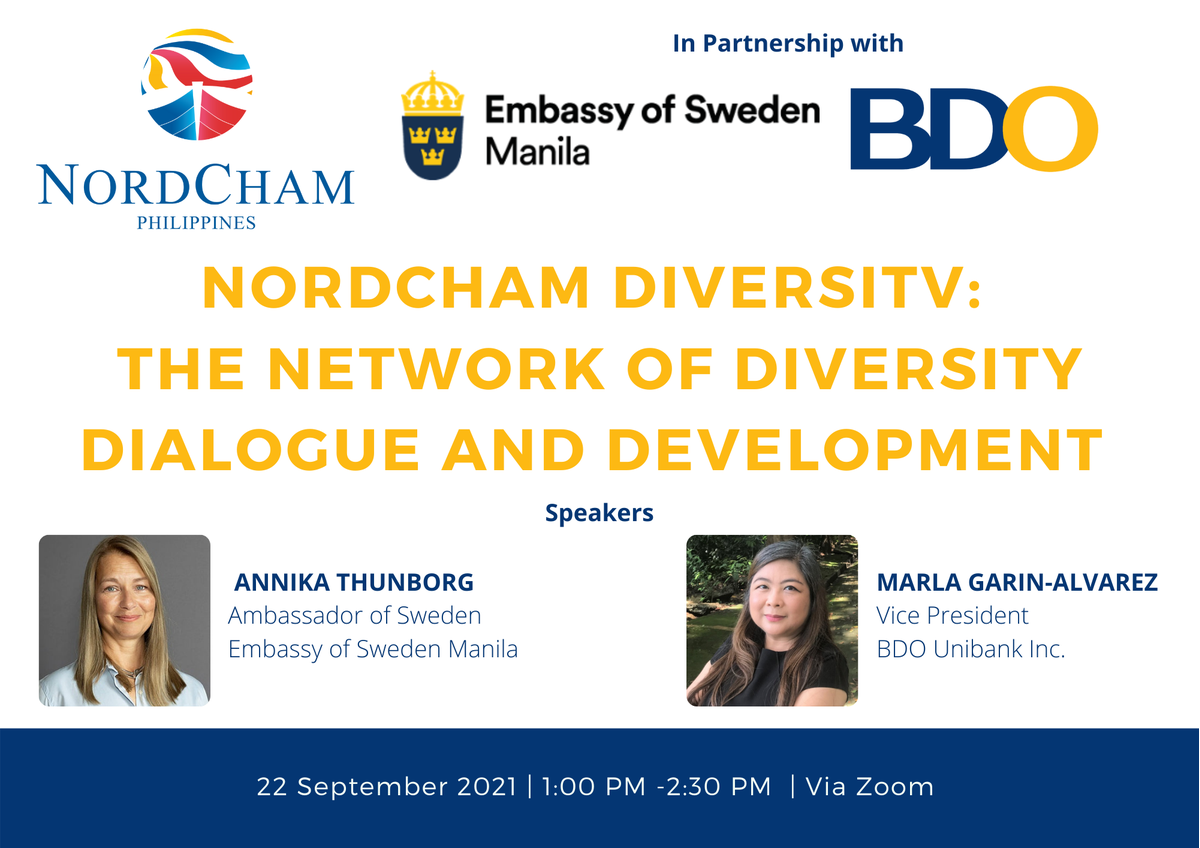 At the crux of the Nordic Chamber of Commerce of the Philippines is its respect for diversity. According to UNDP (2016), "Diversity means variety. Diversity refers to difference." Over the years, NordCham Philippines caters to different nationalities around the globe, in doing such requires an effective work ethic with people from all backgrounds.

With pride, NordCham Philippines will pioneer an event entitled NordCham DiversiTV: The Network of Diversity Dialogue and Development this 22nd of September 2021 from 1:00 -2:30 PM.

This event highlights our deepest appreciation of the importance of diversity to our workplace. Specifically, discussions regarding gender equity and effective work ethic towards different nationalities. Through diversity, this ensures that our business partners and colleagues are mirroring the same vision and mission that we wanted to serve the public.

Join us as we welcome Annika Thunborg, Ambassador of Sweden, who recently arrived in Manila, as a speaker for this event. Ambassador Thunborg will talk about the importance of gender equality and diversity in doing business. Along with our panel of speakers is Marla Garin-Alvarez, Vice President for Sustainability at Banco De Oro, who will enlighten us about gender diversity in a work setting.

Gender Equality and Diversity: Why is it important?

Gender Diversity in a Work Setting

Wrap Up and Closing Remarks

This is a free event, so register now!

Embassy of Sweden in Manila

Dr. Annika Thunborg recently arrived in Manila, taking up her post as Sweden's Ambassador to the Philippines. Previously, she served as Ambassador to Mexico between 2016 and 2021. From 2013 to 2016, she served as Director of the Department of Non-Proliferation, Disarmament and Export Control at the Ministry for Foreign Affairs in Stockholm. Previously, between 2007 and 2013, she served as Spokesperson and Chief of Public Information at the Preparatory Commission for the Comprehensive Nuclear-Test-Ban Treaty Organization at the United Nations in Vienna, Austria.

As a member of the Swedish Foreign Service, she also served at the Permanent Mission in Geneva and in the Foreign Minister's office.

As VP for Sustainability, Marla heads the BDO Sustainability Office and drives the execution of the BDO Sustainable Finance Framework. She oversees policy formulation and programs review, as well as monitoring, tracking, and reporting of the Bank's environmental and social impact and initiatives, and produces the annual BDO Sustainability Report. She works closely with business groups, particularly with the Sustainable Finance Desk of the Institutional Banking Group, Investor Relations and Corporate Planning, Risk Management Group, and the BDO Foundation, as subject matter expert and advisor, to ensure the Bank's alignment of its policies and practices with global standards, regulations, and laws on sustainability reporting. She is also responsible for communicating sustainability initiatives to internal and external stakeholders, and represents BDO in external speaking engagements and forums.

Marla is an experienced international speaker on gender, diversity and inclusion, and sustainability. She is a certified facilitator of the Google #IamRemarkable workshop for women, an Advisor of the Women Inter-industry Network (WIN), and former Board member of the International Association of Business Communicators (IABC) Philippines.